-I´ve heard of him since I can remember. It was my grandpa who used to scream his name every time he had the ball, "it is like magic" he always said, and now I know it´s true. The first time I had seen him was when I was a child, he was entering the pitch with the international equipment.
This "magician" is married and he has two sons (Mateo and Thiago)

-The famous football player is short in height, he exactly is 1,70 meter tall (like we all see his stature is not a problem for him). Because of this, some nicknames were bornfor him, such as "La Pulga" that means "flea". He actually has brown hair, but he recently dyed his hair making it blonde, and he also looks bearded.

-Some people could say, and I believe in this too, that he is a dog. I'm not saying he is a bad player, it's all the way around. I would say he is a dog because of his personality inside the pitch: he is always running behind the ball as any dog runs to catch a bone or a piece of meat. I´t doesn´t matter how many opponents he has in front or how many kicks he received, he´s always looking at the ball and makes it enter in the net making it see as if it is an easy thing to do. He is a good person and a good peer, inside and outside the pitch. He´s kind at teamwork, and although he recently had an episode in which he was punished, he respects the decisions of the referee.

-This man, considered one of the best football players of all time, has hobbies too, likes and dislikes, as any common person. To begin with he said that he never thought about being something else than a football player, that was what he loved since he was very little and he was only 13 years old when he arrived to Barcelona FC (and he is still there). Although he dedicates all his life to do what he loves, he said that he hates being much time far away from home and his family. He likes some other things like the Argentine food his mother prepares, or as he said, "Anything that has Dulce de Leche". He also prefers the summer and going on holidays to the beach, but he affirmed that he loved the vacations to Disney World.

-To sum up, I think this Argentinian football player is nowadays the best one in the world. And I am just greatful to see him playing in our National team and in the Barcelona Football Club. 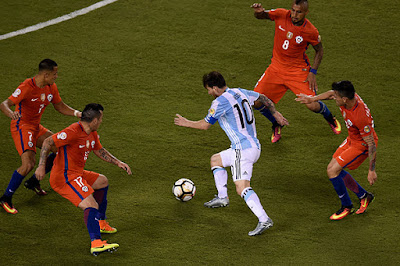