In writing, Julia asked us to continue a paragraph she gave us.

- I went into a large store in London. I saw a young man in a blue t-shirt running down the escalator. He had a big bag in his hand. The other shoppers were jumping out of his way. They ran past me and out of the store. Then I saw another man. He was running too! He was wearing a special suit and was older than the other man. He ran past me, out of the store and on to the street. He looked left and then right, and then started to run again. 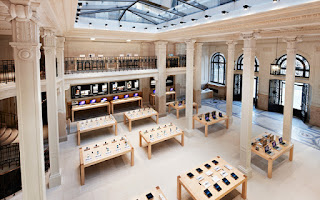 - I went outside and I could see the two men running, until a black car without a plague arrived and the younger man with the bag, got into it. The older man, who could not let him scape, jumped to another car, but this one was different, it was an FBI vehicle! So from that moment on I understood everything. The man with the blue t-shirt was committing a crime and I saw perfectly his face and what he was wearing!

- I entered the store, it was full of policemen. I approached one of them and asked what was going on and he answered me that the jewelry was stolen. I knew that I had to say to him what I saw from the robber, but I assumed that the cameras filmed what I saw, so I took my car and started driving home.

- When I was arriving, something very strange happened. The man who stole the jewelry was walking with the bag in his hand! I tried to hide that I was looking at him, but he realized and stared at me, so I drove quickly to my house. I went directly to the landline, but while I saw dialing the police number the telephone died. When I turned to see if there was something wrong with the plug I saw him, the robber from the store, standing in front of me…