- We had to write a story using the house you chose as the place where the place happens. We also have to choose one of the two sentences that the teacher gave us to begin our story. 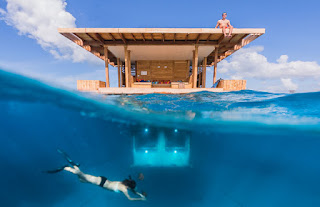 The afternoon was lovely, sunny and hot. The sea look calm, but even when we tried to ignore, we could sense that heavy rain was coming. No matter how relaxing the day looked, I knew that the night was going to be hard. I looked it to my wife and I saw in her eyes that she knew it too. I was afraid about her and my son, Kevin, he only have seven years old and he didn't know anything.

It was too late to scape before the storm arrived, but if we stayed, the house was going to get flooded and we were going to die. So I told my kid we were going to make a trip, my wife collected some provisions and blankets, just in case, and we get into the boat. Before an hour the blue sky turned grey and then black, lighting bolts started appearing. The storm was arriving.

The water to move a lot, making a wave bigger than the other and the rain was falling harder. From a moment to another, an enormous wave covered the boat. I listened my son shouting, but I couldn't help him, he was inside the boat with my wife and it was falling into the ocean. I tried to open the door, but it was locked from inside.

At the time I was seeing how my family wow as dying, I woke up and jumped on the bed. Next to me was my wife. Thank God it had been a dream!